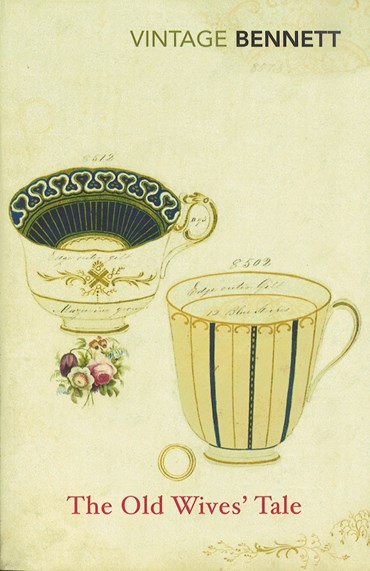 (Published in The Salisbury Review, Spring 2004)

The Old Wives’ Tale (1908) is one of the most underrated novels in English literature, about the kind of people who were once the backbone of the Conservative Party, hard-working shopkeepers and traders. The world of the central characters is underpinned by a code of Noncomformist Christian values. Old Mr Baines hated ‘the modern craze for unscrupulous self advertisement’, and in our age obsessed with celebrity it is refreshing to read about ordinary people, real heroes in their struggles and celebrations of life.

The Old Wives’ Tale tells the vivid but down-to-earth stories of two sisters, Constance and Sophia, whose lives take radically different directions. Their father was a well-respected draper in ‘Bursley’, at the heart of the Potteries. It is a deeply-woven historical novel, full of atmosphelic details, and begins in the 1860s and ends in the early year’s of the twentieth century. The novel gives a picture of the type of moral, regional community that should surely be the core constituency with which Conservatives must reconnect, or recreate, if they are to become again a convincing political force.

One must first bring the novel out of the shadow of the patronising criticism that has always hung over it. Henry James’s long essay in the Times Literary Supplement of March 1914, ‘The Younger Generation’, elegantly undermined Bennett’s writing style. James complained that The Old Wives’ Tale was ‘vividly covered by an exhibition of innumerable small facts’, which ‘exhausts our reaction’. He could detect no deeper artistic form to the novel than its ‘solidity’. Virginia Woolf, in an article in The Criterion of July 1924, ‘Character in Fiction’, attacked the novelistic ‘conventions’ of ‘Mr Bennett, Mr Wells and Mr Galsworthy’: ‘They have laid an enormous stress upon the fabric of things. They have given us a house in the hope that we may be able to deduce the human beings who live there.’

Both these writers were condemning Bennett from the rarefied heights of Modernist criticism. Their key ideological demands were that the true literary work must both eschew authorial commentary and show the world from an inner perspective of character. They condemned Bennett on both points. Their judgement was also that of an upper-class elite against the lower-middle-class Bennett whom they did not consider to be ‘one of us’. They thought of Bennett as a hack rather than an artist. Nothing could be further from the truth. In The Old Wives’ Tale Bennett does show the world from the inner perspective of character. But he also has a sociological range, and a precision of analysis about his culture, beyond the scope of Hemy James or Virginia Woolf.

The importance of belonging to a particular place, as a way of conferring special affirmation to our sense of personal identity, is a deeply conservative value. The opening chapter of The Old Wives’ Tale expresses this theme. Near Bursley ‘rose the liver Trent, the calm and characteristic stream of Middle England’. But the reader’s focus is drawn to a ‘district’ and then to the ‘square’ where the central characters live. There is great lyricism in the first chapter, showing the relationship between the small, constrained world of the characters and the wider, potent images of an historical idea of England that is always present at the edges of the narrative. The importance given in the novel to the geographical roots of characters is intensified because Arnold Bennett was himself brought up in the Potteries.

D.H. Lawrence seems clearly to have developed this theme, of characters set in a provincial setting and their relationship to a broader concept of England, in the first chapter of The Rainbow (1915). The central difference between the two writers is that Bennett does not allow his characters the spiritual or sexual release that Lawrence explores in The Rainbow. Bennett’s characters are internally shaped by the values of the Wesleyan chapel and the harshness of puritan morality: ‘Sophia had sinned, it was therefore inevitable that she should suffer.’

Sophia elopes to France in 1866 with a salesman who has pretensions to be a gentleman. He then abandons her. Sophia lives through the siege of Paris in 1870, successfully running a pension. Bennett, who knew Paris well, writes dramatically about Sophia’s time in France, and subtly draws out the different values between French people and those of a working English woman. The novel implicitly demonstrates a faith in status, order, and fair play in business, that are distinctly conservative. At the age of fifty Sophia returns to Bursley.

Her sister had married Samuel Povey and they run the draper’s shop. The details of their small lives, as they grow older, are revealed so acutely that we can almost taste and touch the fabric of their world, as well as understanding their inner motivations and disquiets. Bennett’s ability to explore the interpenetrations between public and private worlds demonstrates an artistry like that of a more regional Tolstoy. Rarely have the internal dynamics of a lower-middIe-class world been better revealed than in The Old Wives’ Tale. Larger historical events, for example the balloonists escaping the siege of Paris, the ‘Free Library’ opened by Gladstone, electric trams in Bursley, are drawn subtly into the story, always keeping the characters at the centre of the stage, as they struggle with the events of history that work through them.

The Old Wives’ Tale is obsessed with the negative implications of change. The author successfully breaks the rules of Modernist fiction by inserting authorial interjections, for example, ‘How can you be so blind to our fleeting existence?’ It is as if Bennett feels an awful sense of urgency about what is coming to the world of his characters. The author’s occasional use of a prophetic voice intensifies rather than diminishes the themes of the novel, and illustrates his insistent tirade against progress.

This fear of progress is linked to a horror of death. His description of a dead body chills the reader with its physical accuracy. Time and death, the sense of an inevitable erosion to individuals and communities, haunt the book, and the reader feels a deep melancholy at the death of the central characters.
In a more political sense, The Old Wives’ Tale asks the difficult question of how a conservative vision of a small community can hold on to a sense of continuity in a world of increasing national commercialism that threatens regional solidarity. At the end, the sisters live together. Bennett’s concrete, pictorial imagery strikingly expresses the contrast between the sisters’ memories of stability in their youth and the juggernaut of inevitable change that is destabilising their community.

The Old Wives’ Tale offers a kind of narrative meditation on conservative beliefs. For the underlying values of the novel – thrift, hard work, civic pride, the importance of duty – were those at the roots of Thatcherism. Margaret Thatcher’s father, Councillor Roberts, would have grown up in a regional urban community similar to that depicted in The Old Wives’ Tale. But in an increasingly uprooted world of vapid E.E.C. values and global capitalism, how can such communities survive, or be restored? And what now, in a post-Thatcher world, is the relationship between Conservatism and the bleak Noncomformist values of the novel? However, The Old Wives’ Tale should be read first as a brilliant and moving story about a particular vision of Englishness.