Dr Lachlan McCready, the eponymous hero of Scottish writer Michael Cannon’s third novel, is the much-loved doctor in a small fishing village, Rassaig, on the west coast of Scotland in 1941. For those who remember the popular television series of the 1960s, Dr Finlay’s Casebook, there is a resemblance between the programme’s benign, elderly Dr Cameron, and Lachlan McCready: both tend their community with humour and wisdom. But this bold, readable novel soon develops in darker and more complex ways than Dr Finlay ever attempted.

After a complicated journey, a Jewish refugee boy, Franz, turns up in the village and Lachlan gives him a home. At the same time three English girls, working on farms to help the war effort, are billeted in the area. The locals gossip salaciously about them.

Cannon is a natural storyteller and he explores Lachlan’s past, including service as a doctor in the First World War, particularly convincingly.
Cannon has the ability both to expose, and to sympathise with, human frailty. He writes intensely about sexual and religious passion, and his judgement of religious fundamentalism is acid sharp, embodied here in the figure of “Gavin Bone, Elder of the Free Presbyterian congregation”, and hater of all the village Catholics. Cannon makes a fascinating investigation of the conflict between a Presbyterian and a Catholic view of the world, as it is lived out in a small village.

If there is a flaw in this short novel it is its ambition: there are just too many characters and incidental plots. Lachlan’s War is attempting to be too many different kinds of novel: it is historical, psychological, a novel of ideas, and a novel of place. Occasionally, too, the author’s style runs to melodrama.

That said, it runs along at a cracking pace. The stories within stories keep the reader alert and interested, if sometimes frustrated that the central characters are not getting their share of attention. When the focus shifts briefly to Franz’s background in Prague, we feel alienated, and not close enough to care that much. It is Rassaig that provides the strange, sometimes macabre and primitive atmosphere that gives such a rich texture to the narrative.

The story concludes on an uplifting and moving note of change and acceptance, with Lachlan’s reflections placed rightly at the centre:

“Only fools, or those who read too much, fail to take consolation from the texture of the everyday.” 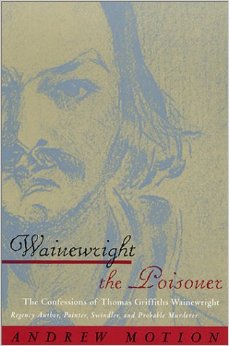 March 5, 2015 / The Editor / Comments Off on Jeremy reviews “Wainewright the Poisoner” – Andrew Motion

Thomas Griffiths Wainewright (1794-1847), the little-known subject of Andrew Motion’s intriguing book, was a significant figure in the London of his times: artist and writer, he painted Byron and was a friend of Fuseli and Blake. The form of the narrative is as beguiling as the subject matter. Eschewing straight biography, Motion writes the ‘Confession’ from the fictionalised first-person viewpoint of Wainewright.

At the end of each chapter, he adds ‘Notes’ — scholarly, biographical information about the real Wainewright. This ‘creates a fascinating alternative perspective to the vivacious but chilling story of the gentleman-dandy artist. After the suspicious death of three relatives, he was charged — though only with the forgery of life insurance documents and transported to Tasmania. Wilde wrote about him, spookily foreshadowing his own downfall.

This mixed-genre study produces a complex reconstruction of its subject, and reinstates Wainewright in his Romantic context. 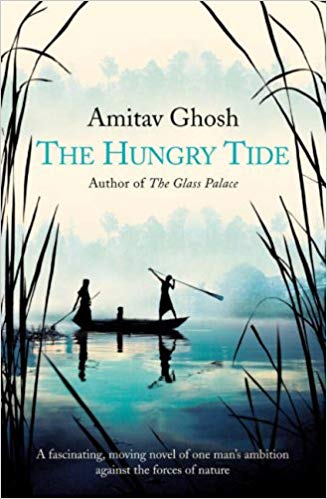 August 5, 2012 / The Editor / Comments Off on Jeremy reviews Amitav Ghosh’s The Hungry Tide

“South of Calcutta are the “Sundarbans”, an archipelago of more than 50 islands in the Bay of Bengal, and this is the sensual and turbulent setting for Amitav Ghosh’s spellbinding, tautly written contemporary story of struggle and human dignity. The author is a convincing interpreter for the Western reader of this unusual world: born in Calcutta, with a doctorate in social anthropology from Oxford, he brings to his ambitious work a 19th-century, Hardyesque scope of analysis and exploration.”